“Happy birthday to the best mom, ever!”

I remember writing those words on her birthday cards years ago. I am thrilled to be able to do so today.

Today is my mom’s 75th birthday.

Oddly enough, as I was having my morning coffee, I came across this quiz. And, as most of you know, I am addicted to taking these dang things. Being that it is my mom’s birthday, I just had to know – How Similar Are You to Your Mom?

END_OF_DOCUMENT_TOKEN_TO_BE_REPLACED “Presents don’t really mean much to me. I don’t want to sound mawkish, but – it was the realization that I have a great many people in my life who really love me, and who I really love.” – Gabriel Byrne

Somehow, I have made it through “The Year of Firsts.”

It was July 24, 2011, in the very early hours of the morning, that Dad was called to be with the Lord. At 1:40 a.m., he ceased to breathe on this side of Heaven, and continued his pain-free journey with those he loved who had gone on before him.

He may have broken a record for the shortest stay in Hospice, as he was wheeled into the room around 4:30 p.m. on July 23, and didn’t even make it a full 10 hours. I remember it vividly. And these past few weeks, as hard as I tried, I couldn’t help but to remember every single detail. Every single detail.

The Alzheimer’s ravaged his memory, but one thing that will always stand out during his last stage of life was his love of children. He was fascinated watching them, and enjoyed visits with his grandchildren and his great-granddaughters. His entire face lit up when he was around them. I think, too, that the kids had no fear of him. I believe some adults who knew Dad feared him because of his disease – not knowing what to say, how to react or if they’d somehow catch his dreaded, memory-sucking affliction.

So as we neared the one-year mark, this was how my brain functioned; like an over-worked diary that spit out timeline info on a continuous basis:

Thinking I was going crazy (hey, no comments from the peanut gallery out there!), I shared my concern with a friend who lost both her parents recently. She asked how I was doing, and I was a bit emotional saying, “It’s one year today. He died at 1:40 a.m. last year, and I woke up at 1:55 a.m. this morning. My first thought was, ‘It is finished,’ and I cried.” With a hug she comforted me, and admitted that she went through this process as part of her grief experience as well. I felt better. Like I hadn’t totally lost it.

So I embraced those times and dates. Difficult as they may be, those memories are part of my history, and they make me who I am today.

I allowed my brain to continue:

“July 25, we met with the funeral director and pastor, planning the visitation and funeral. July 25 and 26, we collected photos and memories to celebrate his life on July 28.”

July 28 – a year ago today, at this very time – we gathered with several hundred people and celebrated Dad’s life.

But July 28 has another major significance for me. It is my granddaughter’s birthday. We will gather today, on her fourth birthday, to celebrate her life.

Could it be God‘s hand at work, as we gather today, to yet again celebrate life? 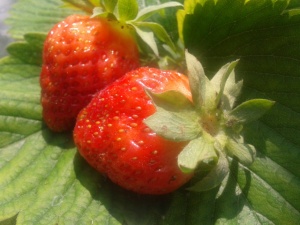 There is a time for everything, and a season for every activity under the heavens… Ecclesiastes 3:1

My favorite time of year is upon us. School is starting to wind down, the weather has been spectacular, and the strawberries are beginning to ripen. Those beauties in the photo came from my yard!

A few years ago, I bought four little strawberry plants. Because I really have no idea what I am doing in the yard, I planted the them behind the garage. Apparently, there are better ways to boost one’s harvest if you just, um, do the research. But even with my mix-up, the plants are taking over that patch of ground and we are getting some decent-sized berries, which are absolutely delicious!

June has always been one of my favorite months, and one of the main reasons: strawberries. For me, just going to our local farmers’ market is like visiting a small space in heaven.

Growing up, these little tastes of heaven were a mainstay in our home. With Father’s Day and my dad’s birthday about a week apart, it was a sure guarantee that something bearing strawberries would be on the menu.

Our family has a rough stretch to get through in the very near future. This will be our first Father’s Day without Dad. On June 25, he would have been 77. And just a few weeks after that will mark the one-year anniversary of his death.

It hasn’t been easy, and I imagine it won’t be easy in the weeks to come. I seek comfort in prayer, in my family and friends. I look for joy in the little things – my granddaughters’ laughter, a pathetically bad joke, a sunny day, flowers in bloom.

I found joy in the warmth of a beautiful and sunny day in May, picking the first two berries of the season, smiling at the little miracles in my hand: from the frozen ground to the leaves pushing through the damp earth, to the pretty blossoms to the berries in my grasp. Life, indeed, goes on.

So, Dad, here’s to you! I will consume as many as possible in your memory