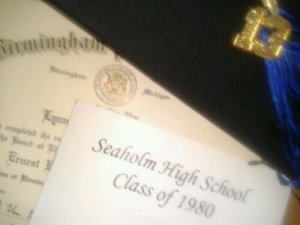 “Keep in mind that neither success nor failure is ever final.” – Roger Babson

So today, June 13, is the 33rd anniversary of my graduation from high school. Wow. I know, I know… I just dated myself…

First, how on earth did 33 years fly by so quickly? I haven’t done half of what I had planned to accomplish on that sunny day back in 1980. My plans were to head to college and become an accountant. Fame and fortune and a corner office downtown were waiting. Those plans changed quickly when I bombed pre-calculus and realized I didn’t love accounting enough to waste the time on trying to pass the class a second time around – on my dime. (Yes, I am one of those rare breeds that paid for my schooling.) So when I saw that the accountant gig wasn’t going to pan out, I fell back on to my childhood dream of being writer, and I was going to be the next, best reporter. Ever.

But then, marriage and four kids came along, and I never finished that journalism degree. In hindsight, maybe that was good, as print journalism took a nose dive. The military life had us moving around, and by the time we finally settled back home and my brood started to enter school, I had left the world of newspaper advertising and began freelance writing for local and daily papers and magazines. It was a wonderful balance.

I married a great guy – my soldier, a true hero – and we have four great kids of our own, and two recent additions – our son-in-law and daughter-in-law. We have two beautiful granddaughters. We receive wonderful accolades on our children – better than a Pulitzer or a byline in a newspaper.

The gal with the diploma didn’t have a clue that she’d meet her husband on a blind date, become a military wife, a mom times four, a military mom or a struggling writer. She didn’t know she’d live in Hawaii or visit other areas of the world. She didn’t know the joy and pain of being a parent; how hard it would be to watch her children struggle, face disappointments or to send a son off to basic training; she also had no clue as to how it would feel to have her husband and son deployed back-to-back in a war zone. She didn’t know she’d watch her dad succumb to the ravages of the worst disease ever – Alzheimer’s.

She didn’t know that she’d realize what her faith meant to her, and that she’d echo the same sentiment as her dad – that the only thing that really mattered was that her children came to know Christ. She didn’t realize what her mother went through, until she, herself, faced similar life situations and drew on the strength of her insanely strong mom.

That very shy graduate, the one who rarely opened her mouth back in the day, couldn’t possibly have known that one day, she’d have op-eds published in two Detroit dailies. That she’d defend her babies and march right into the school on two occasions, confronting teachers that bullied her daughters. That, paid or not, she’d keep her dream of writing alive. That she could face her fears and shyness and actually perform a few skits on a stage. In front of large crowds. That above all, God, family and love would be the priorities in her life.

She couldn’t have known that her fellow graduates would also face life struggles: divorces, deaths, job losses – and that they’d find fellowship in supporting each other as they grew older. That the smaller, more intimate gatherings weren’t to see who was the most successful, but to support each other and cheer them on – during the good times and the bad.

When I think back to the 18-year-old girl grasping the diploma, I wonder – did I disappoint her? I didn’t become the bang-whiz accountant or the ace reporter – that’s for sure. But, what I didn’t achieve for her career-wise, I sure think I made up for in other ways. She has a Master’s in the school of hard-knocks, which went a long way in developing her character. You see, that young kid is pretty damned content with how it has all turned out, and she learned that true success is measured in love.

And by that measurement, she knows that she has been repeatedly and abundantly blessed.

Do you ever reflect on your high school graduation? Let me know in the comments below.